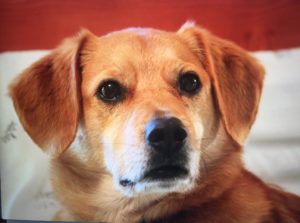 The word “euthanasia” comes from the Greek phrase “good death” and I feel, as a veterinarian, that my duty and honor is to provide just that. It is a gift to relieve (or prevent) suffering in terminal disease. Coming to that decision is often the most difficult part (see previous post regarding when to say goodbye) and once the decision is made, I feel empowered to help create a “good” death.

At Adel Veterinary Clinic, our #1 goal is for the pet to be comfortable and unafraid. Throughout our days we are advocates for silent, but insistent animals and we are committed to putting them first. We have a comfort room with dim lights, a couch, pheromones (calming substance), music, tasty treats and a private exit. We often use sedation (by way of an injection in the muscle) to help an animal relax and not feel any pain or distress. We provide afterlife care through private or communal cremation. We love when pet owners stay for the goodbye but are understanding of those that don't and feel passionate about the privilege and responsibility of being with a pet when they pass away. I am most proud of my team in these hallowed moments as they shine so very bright with pure empathy and love for all animals.

However, my preferred method if possible is to say goodbye at home. We offer (as much as our schedule can allow) home euthanasia and I have found them to be the most rewarding “transitions” I have been a part of.

I would like to share what happened after I had made the decision to end Holden’s life in hopes of relieving anxiety about the actual event to those that will face this process. This is one example of how it can be done and then I will share the continuation of my family’s personal loss.

Once I had decided it was time, I talked through everything with my husband and children. My sons are 7, 5 and 4 years old and had already been told that Holden had cancer and was going to die. We had the benefit of knowing his diagnosis for over 8 months and his quality of life was great throughout that time, something I will also be grateful for. That time gave me the much needed opportunity to appreciate Holden for who he was. My greatest fear (looking back) would have been to have him get suddenly sick and die. Since he was such a spirited (naughty) dog, the time we were given allowed me to treat him well and not live with regret.

Thankfully, just the day before we said goodbye my 4 year old raised a fantastic question out of the blue on a walk asking “Mommy, don’t you tear open dogs’ bellies?”

I responded, “Yes, I can do surgery to fix a dog, like if it eats a ball or sock.”

Lewis responded, “Then can you please fix Holden?” 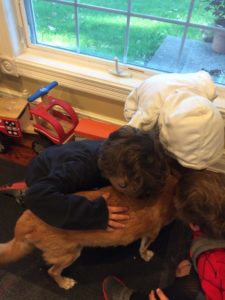 Wow- I was floored because I then realized that I had never explained that I COULDN’T fix Holden. Boy was I glad he asked so I was able to explain to my entire family that Holden had a disease I could not fix no matter what we tried.

Though at the surface this would seem to be a vet problem, I think it is just as important for other families. I believe it is important to explain that the pet (or person for that matter) can’t be fixed. We often forget how little minds work and if we don’t explain things well, they can certainly suffer from worry or questions unanswered.

Once my husband and I had decided it was time we sat the boys down to discuss the details. I explained that as Holden’s mom AND doctor, I knew he was getting very sick, not acting like himself and would not get better. I told them that in animals, we can decide to say goodbye. I explained that he was going to die sometime soon if we didn’t do anything but it could take a long time (days or weeks) and that he would be hurting and scared. I told them that in animals we can choose to give them a peaceful death. I explained that it is very hard to know but that I was sure this was the time to make that choice for Holden because we love him so much and we don’t want him to be hurting or to be scared.

(As a side note, I have briefly explained euthanasia to my children before when performing one for a client has interfered with our plans or after a particularly emotional one has left me “off” for the day. Since it wasn’t directly affecting them, I have no idea if it stuck but I feel like at least the concept had been mentioned before so it wasn’t quite as mind-blowing as it might have been out of the blue.)

I explained that Dad and I had decided to say goodbye to Holden at home so that he would be as comfortable as possible. I told them that our daycare provider would be willing to be with them at her house or our house so they wouldn’t have to be with Holden but that Dad and I both wanted to be with him.

Then I explained exactly what would happen to Holden and even some guesses as to what they might feel during each part. I told them all the details; the poke in the rear end to relax him, how he would start to feel funny (seeing flying cheeseburgers) and then lay down, the tourniquet to see his vein and the injection that would stop his heart. I said that he might go to the bathroom during it, that he might have some strange movements and that he wouldn’t close his eyes. I know this all sounds incredibly harsh but they were going to know he was alive after school and gone before bed and I honestly think some of the things they might imagine are far worse than the reality of a humane euthanasia. 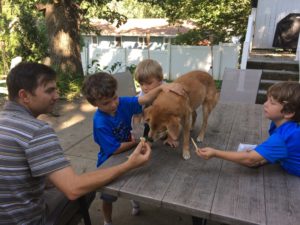 I told them that I wanted Holden to be surrounded by those he loved, in our back yard and with a belly full of ‘nummers'! We all cried as I explained this. I answered a few questions, reiterating that I knew it was time and that Holden wasn’t going to be scared or hurt. They all said they wanted to be with him and they were. We fed that sweet, naughty dog a cheeseburger and fries on top of the table in our backyard and he loved it. We hugged him and cried together as he relaxed from his sedation. We petted him as I gave him the final intravenous injection that would stop his heart. And we wept when the reality that he was gone set it. It was hard. It was really, really hard.

I worried a lot about the boys. Of course about them seeing Holden die, but also about them seeing their mom and dad so sad. But I have faith in the truth and I know they will suffer much in this world if they risk loving much. As my father shared with them, grief is love facing its biggest challenge. How lucky were we to have loved Holden so much.

I know they have questions, I HAVE QUESTIONS!! Was it the right time? Could he have had a few more good days? Was he scared? Did it hurt? I don’t know. But there is SO MUCH we don’t know.

What I DO know is that he was hurting and not himself. Then, he got to eat a cheeseburger and fries WITH his boys ON the table. Then he got lots of hugs, saw flying cheeseburgers, was getting kisses and was gone…

Wherever he may be now is only a guess (though I imagine a wonderful place with many furry friends I have known and loved over the years- but no shedding because a day without pet hair on me would be pretty cool…) but I know he isn’t scared or hurting anymore and for that I am grateful.
For now, I am working with my sons on the decision to bury or cremate. Part of me regrets that I took them on a tour of Loving Rest the crematory we use, but those guys (and gals) are family to us at Adel Veterinary Clinic… and the zoo was so close to their open house in Indianola…

But honestly, my sons will grow up and learn all these hard realities and I suspect discussing it with loving family members where you can ask any and all questions and likely have fewer pre-conceived notions is a good thing. We will work it out.

Obviously, having experienced so many of these situations allowed me greater ease to be open with my children about euthanasia. But it is also a well known fact that children are incredibly perceptive about death; I have found this to be the case in my sons.

This time it seems to have worked out ok for me.

I will fully admit that this is a lot for children to process and experience. I fully support not including them in euthanasia if that is what a family decides. I am, however, a strong advocate for telling kids the truth. I believe a totally appropriate explanation for a euthanasia appointment at the vet could be “We took him to the vet. He was very sick and he died.” This is much preferred over “he ran away.”

What I ask of you is to know that we will be there to help you. If you are a client of ours, please know that we are willing to talk about and help with any and all questions and requests you have regarding end of life care.

If you aren’t local, go “down the street”, or across the country, please know that veterinary professionals all over the world are in this field because they care. Facing this reality is what we do and in most cases we can help if you let us know how.

Just yesterday I had two very difficult goodbyes at the clinic. Those dogs were dying. Those dogs were loved. There were tears, hot dogs, string cheese and hugs. I feel honored to have been a part of the gift of a “good death” and though it is incredibly painful, it is a courageous act that I am blessed to see many people boldly choose in the name of love.