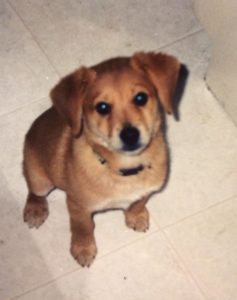 Holden was named after Holden Village, a retreat in the North Cascade mountains of Washington State where I have visited many times with my family. It is a place that brings me peace, that spot I go when I close my eyes searching for my “center” when life is a struggle.

We “inherited” Holden at about 12 weeks of age from my brother and sister-in-law who had adopted him from a rescue in Minneapolis. They wisely discovered that apartment-dwelling with two full time jobs was not the life for a puppy. Damon and I were fooled by his adorable looks, the desire to be “parents” for the first time and thus, committed to dealing with his shenanigans for the next 14 years.

I diagnosed Holden with acute lymphocytic leukemia over 9 months ago after bringing him to the clinic for a routine dental cleaning, something he had performed about every 4-6 months. I had done bloodwork just 6 months prior to that visit and it was perfect. I was shocked to discover that he literally had the highest white blood cell count I had ever seen and was still looking 100% healthy. After doing some research, I learned that his prognosis was poor (expected survival of only 1-2 months) with or without advanced treatment and I decided to keep him comfortable and happy as long as we could. Holden had developed quite a host of anxieties over his final few years and being home with us was certainly his happy place! Explaining to my family and friends that he was sick was a bizarre experience as he had absolutely NO SIGNS of illness from diagnosis until about 4 weeks before we said goodbye. As I mentioned, this was a gift of GIGANTIC proportions for me, providing the opportunity to treat him with love and attentiveness that had honestly been lacking in many ways over the past few years.

Since we were suddenly facing that his days were in-fact going to be numbered (having always been certain THIS dog would live forever), my family starting thinking about his final resting spot. We knew we would be returning to Holden Village for the first time in 5 years and I felt strongly that burying some of his ashes there would feel right for all of us. That little devil was acting about 95% healthy 8 months after his diagnosis and of course, we traveled with worry of his health in our hearts as opposed to his ashes in our luggage.

My parents have a beautiful woodland in NE Iowa that is the resting place to our family’s most beloved pets, including AJ. I felt cremation would allow part of Holden to rest in that pet cemetery (with my heart-cat), some in Holden Village, some here in Adel and even the possibility of a pendant for my oldest son who had become increasingly attached over the past year.

As I mentioned before, my children joined me on a tour of the amazing state-of-the-art Loving Rest facility and thus my plans were changed. With his intimate knowledge of the process, my oldest son asked that we not cremate Holden and instead bury him “in one piece”. I struggled some as this obviously wasn’t what I had envisioned and I am a strong advocate for cremation, but as all parents (and others that love kiddos) know, there are many times that our visions can fairly easily shift with the tug on the heart by a child.

I was proud that my son knew what he wanted and felt comfortable sharing his wishes so we planned a burial and funeral.

My heart was ripped open as we laid him to rest. That final goodbye feels so permanent. With advice from a colleague, I read the attached poem “The Eulogy” to end our service. My son later commented that the poem made him “feel SO MUCH better and happy for Holden.” (THANK YOU!) The next several bedtimes included reading the great book, Dog Heaven. As these things often go, my youngest son was so smitten with Dog Heaven that he “just wants to go there now” bringing about an entirely different discussion of life and death!

We are still having ups and downs, but knowing “his spirit is free” has really helped. How lucky were we to have loved so much.

I know that when we return to Holden Village we will still be carrying a piece of Holden with us.